The Devil Can Wait ... In More Ways Than One. 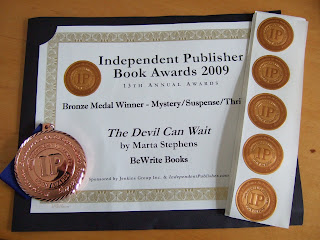 It's been a while since my last "newsletter" and although a great number of things have happened since then, I'd like to share with you another story about THE DEVIL CAN WAIT. For those of you who know that the subject of this book is a cursed ring and the many weird things that happened during the final stages of preparing it for press, what follows won't be a surprise.

THE DEVIL CAN WAIT, is the second in the Sam Harper Crime Mystery Series. It was initially written as a short story in 2004, then later was expanded into a novella in 2005, and was finally released in November 2008, as a 316 page novel. It was selected as a bronze medal finalist on May 29, in the 2009 Independent Publishers Book Award (IPPY).
I knew about this award in early May, but it wasn't official until the 29th when the winning entries were announced at the BookExpo award ceremonies in New York City.
I was thrilled beyond words and blogged a bit about it on June 24. As noted, I wasn't able to attend the event, but was assured the items pictured above would be mailed to me within days from their offices in Michigan. I waited for the mailman every day knowing that I wouldn't be able to believe I won until I saw the medal with my own eyes.
When the medal and certificate didn't arrive two weeks later, I wrote to the PR firm to ask about them. I was assured that the medal had been mailed out 3-4 days before. I waited another two weeks and wrote again. This time, I was told the items had been mailed to my publisher in the UK. Unfortunately, she lived in Germany, but good fortune prevailed and a family member received and shipped them from the UK to Germany.
I received this photograph taken by my publisher today (July 9) with a note telling me the package finally arrived in Germany safe and sound and that she would send them on ASAP. Needless today, this medal has earned more flyer miles than the wandering gnome, but at least I now know they're in trustworthy hands.

Fortunately, the apparent curse couldn’t keep the book from receiving wonderful reviews or winning a prestigious award like the IPPY--not as long as Sam Harper's fans continue to read it. But it seems the curse insists on getting the last jab, because eight months after it’s release, my bronze medal has gone on a world tour without me.
To learn more about the "weird things," read on ...


Thumb through the pages of your favorite book. Now, look close between the lines. That’s where the author bled onto the pages and wove together a mystic world of fiction fed by life experiences. Every line of narrative and section of dialogue holds a thimbleful of truth. The second book in the Sam Harper Crime Mystery series is no exception. THE DEVIL CAN WAIT was forged from the memory of an unholy event as frightening as it was intriguing. It’s a tale about belief, unholy forces, and one man’s determination to stop an obsessed killer.
The story behind the story involved a quarrel and a cursed black pearl ring that nearly killed the object of a jilted young man’s affection. Filled with resentment, he begged her to take the ring as a parting gesture. Within days of accepting his gift, the young woman fell victim to a number of life-threatening accidents that came in quick succession. She survived each incident, but evil remained a constant threat to her life. It was only after she destroyed the black pearl ring that all appeared to return to normal.
Such was the spark behind THE DEVIL CAN WAIT; fiction with a taste of the unexplained. I was an impressionable eight-year-old, unable to distinguish fact from fiction, yet that event seared itself into my mind and eventually gave birth to THE DEVIL CAN WAIT. Can inanimate objects receive and transmit energies through a single touch? Is the good or evil nature of a person a predictor of luck or misfortune?

Years later, I can neither prove nor disprove that curses exist, yet I’m left to wonder what truths have slipped between the pages of this Sam Harper mystery that kept critical e-mails from reaching my editor? What power made manuscript files disappear and Internet connections break off for days at a time without rhyme or reason? Coincidence? I thought it was, until the literary contract sent to my publisher at the same street address I’ve used for several years found its way back into my mailbox three months later marked, “Insufficient address.” Subsequent mailing attempts met the same fate, yet my greeting card arrived at her office without a hitch. I can’t explain these things nor is it clear why the first three artists who were eager to work on the book cover had to stop soon after starting due to … pressing events that forced them to quit.
In THE DEVIL CAN WAIT, the city of Chandler, Massachusetts is plunged into terror when the bodies of three local teenagers wash ashore. While homicide detective Sam Harper hunts down the guilty, a sinister plot emerges overseas. From the Vatican to the jungles of South America, a cursed black pearl ring, the demonic prophecy it represents, and the men who pursue its powers find their unfortunate way into Harper’s turf.

Enthralled by the ring’s story and a front-page spread, newspaper reporter Jennifer Blake agrees to pick up the ring at a local pawnshop for her former college professor. When she does, unforeseen events shoot Blake to the top of Harper's prime suspect lists. Soon, the seemingly unrelated cases converge and the heat is on for Harper to expose the truth behind a Vatican secret and stop the self-righteous man who does the unthinkable in the name of God.
Did the sound of keystrokes tapping life into THE DEVIL CAN WAIT wake a slumbering presence from the depth of obscurity where holiness clashes against the dark and profane? I’ll let you, the reader, be the judge. The only certainty is that THE DEVIL CAN WAIT can wait no more. It’s here, so light a candle, take a sip of your favorite brew, ease into that over-stuffed chair, and immerse yourself in the pages of THE DEVIL CAN WAIT—if you dare.
If you're interested in receiving an autographed copy, please let me know. My books are also available at Amazon, B & N and other online shops.

Have a great summer and more new to come soon!
Posted by Marta Stephens at Thursday, July 09, 2009

Thanks so much, Sassy and Terry. You two have been so supportive througout the process. I really appreciate it!

The Devil Can Wait Book Trailer